Footsteps in mud, blood and rain...

The week before I decided to jump back over the pond for a nice cozy Christmas in Germany I figured I oughta do something to get me into the true spirit of the festive season. Together with his fantastic team, director and newfound friend Nic Dawkes invited me to just the thing I was looking for: Trench warfare and the killing of women and children... 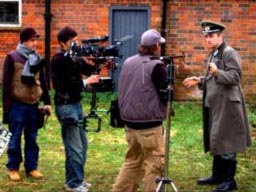 No, we did not enlist into the American army and go to Irak. Instead we shot a WWII based shortfilm entitled "Footseps" (the plot of which I won't spoil and will rather direct you to the homepage: www.getmescene.com/footsteps ).

I don't want to jinx it, but if the production values are anything to go by I think this will be one hell of a piece of work. Everyone from the DOP to the make-up artists were astonishing in what I struggle to call a low budget production.

The culmination of the project for me was in the last night of shooting. The cast and crew stood side by side till 5 am after the heavens opened and we were up to out ankles in mood and artificial blood. 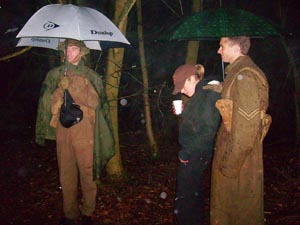 The carefully planned, perfectly equipped shooting schedule turned into guerrila warfare: Making sure the equipment stayed dry... Make-up artists straddling actors in vans to apply gunshot wounds... Friends of the crew sticking around to help wherever they could... Actors lying half-naked in the middle of a field shivering - no - convulsing with cold before having to play perfectly still corpses... it was great.

One of the corpses remarked jokingly he would kill the next person who said an actors life is glamorous... Well, maybe not glamorous, but a hell of a lotta fun.
Guys if you're reading this: Any time, any place.