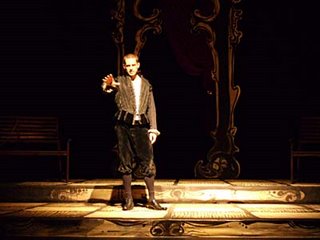 Well, I promised you I'd tell you a little something of what I've been doing, and here is one:

Ryan J-W Smith is the author and director of "The Power Play" in which I had a small and very sweet part. The play is an Elizabethan-style tragicomedy written in iambic penthameter and bears resemblance to a story of "Hamlet before the death of the king".

I have to say, at first I was sceptic about another "upstart English son" taking on the form of Shakespearian writing. But it didn't take long and I was pleasantly surprised (and so apparently were others who made his second play "Love's Labour's Won" the Pick of the Fringe this year in Edinburgh).

As a bonus we were playing at the beautiful Vanburgh Theatre at RADA.

The pictures to the show were taken by myself, so I'm afraid none of me, but there are some of "The Taming of the Shrew" now in my portfolio courtesy of Richard Hammerton.
Posted by Chris Rogers at 1:42 am 1 comment:

Anyone got a Marsian I could borrow?

I was given a 50 Pound Virgin voucher, bought myself loads of DVD's and tonight, just when I wanted to watch one of them, I find out the celophane had been opened and the disk wasn't acually in there... 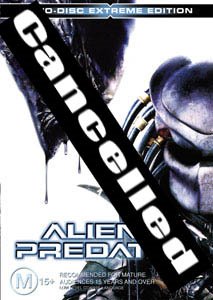 It was stolen. Bummer.

And I really wanted to find out who wins between Aliens VS. Predator (and then sell the piece of crap on ebay to get my money back, which is really what hurt).

Funny enough nobody stole any of the Godfathers (they were on offer, I couldn't refuse) or Ghostbusters, Broke Back Mountain or Serenity (which I watched last night, is a piece of crap but made me laugh). This tells me our thief was out to save my tastebuds in film.

To the thief: I enjoy watching trash occasionally. I hope you soil your pants watching the DVD I bought, rot in hell for your sins and slowly gets your guts torn out by something that looks like a hibrid of a Predator/Alien.
Posted by Chris Rogers at 1:56 am 2 comments:

1. Be an Actor
2. Go on profitshare tours that last 3,5 months
3. Go on a holiday you can't afford
4. Come back from Holiday and decide to do more unpaid acting work
5. Move house
6. Let your housing association charge you extra fees they never mentioned
7. Help someone out, then let them F*** you over for money
8. The girl at the bar is cute...
9. Oversleep on your first day back to work

When all else fails try the one I haven't had the guts to yet:

10. Marry, arrive home early, find your wife in bed with another actor (musician, forearm-tatooed biker...). Then pay the legal fees for the divorce and her deserved psycho-therapy (after all, you did see her naked, didn't you?).

Well, I've just been through steps 1-9, so apologies for not posting lately. However, as I now live in a place that has internet I'll tell you all about the last few months in the next couple of posts.

To be honest, I have had a ball lately! Unfortunately my plan to hypnotise my bank manager, make him give me all the money and then make him squawk like a chicken has failed.