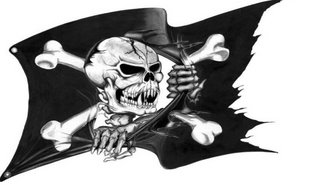 Last weekend I did a three day street Festival called Made in Deptford. We did a play about pirates because some rumour the original skull and crossbones flag comes from St Nicholas Church.

I was amazed when I started reading up on the history of pirates. You always think female pirates are an invention of Hollywood, but do check out the history of Anne Bonney and Mary Read!

And in this picture of Blackbeard it isn't smoke coming out of his ears, he used to knead wicks into his hair and set them on fire when he was attacking ships making him look so devillish that others would surrender without a fight! ...crazy cat.

Apparently they also had fairly democratic systems on the ship. Set rules and voting rights. (And the occasional removal of a captain when they thought he was a wimp.)

Well, Hollywood eat your heart out, there's plenty more material to make films of!
Posted by Chris Rogers at 10:07 am